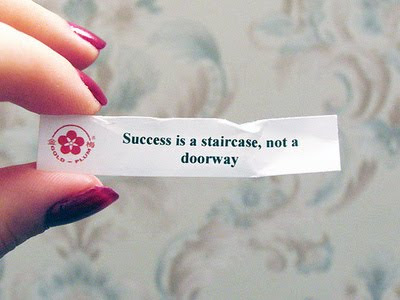 LUCK: noun 1. the force that seems to operate for good or ill in a person’s life, as in shaping circumstances, events, or opportunities.

Let me get something out in the open. I don’t believe that any one person has more ‘luck’ than another person. All things equal, there are times when circumstance favors some individuals over others, and vice versa. In the end, though, no person gains more favor over another simply by ‘luck.’ Like anything else in life, there are ebbs, and there are flows. (And I’m not talking strictly in material terms. Someone may have been born into money, but they may also be a glorious dumb ass.)

In the end, what’s the difference between those perceived as ‘lucky’ and those who see themselves as ‘unlucky’? I’d say it’s a mix of hard work and savvy. Hard work alone doesn’t get you what you want; you might be working ‘really hard’ to make accessories for 1989 Chevy Cavaliers, but you’re not going anywhere with them. Similarly, savvy won’t get you there, either. Strategy and brilliant ideas are useless unless they’re applied.

But if you have both – hard work and savvy – you can have what you want. You can be ‘lucky’ – lucky enough to have the perks of what you worked for. (Geez, I sound like a Republican today. Don’t get too excited, red states.)

Unlucky? I’d argue that you’re not working hard enough. Or if you are working hard, perhaps you’re not considering new ways of applying your efforts. There’s a reason not everyone is a millionaire. It might look easy to live with success; but it’s a dirty hike to get there. So if you’re resenting others for what they have and self-loathing for what you don’t, it’s time to get over it. Self-pity is like a rocking chair. It’ll keep you busy but it won’t get you any closer to where you want to go.

And self-pity’s name reveals who will feel sorry for you – just you.

davidberry
Message
Previous article
Christianity & Moral Issues of the Crotch
Next article
Am I Gay?